The Chinese property market is set to be regulated further

by Commodity Inside / Thursday, 23 March 2017 / Published in Construction

It has now been almost a year since Shanghai introduced its most stringent policy to control the overheating property market. The boom in the property market has not been limited to Shanghai only but also observed across other major cities. Prices are still climbing at double digit growths across major cities but they have recently showed some slowdown. New properties, new commercial properties and used properties’ prices in Shanghai jumped by 21.1%, 25% and 32.2% respectively on year-on-year basis in February 2017, according to NBS. 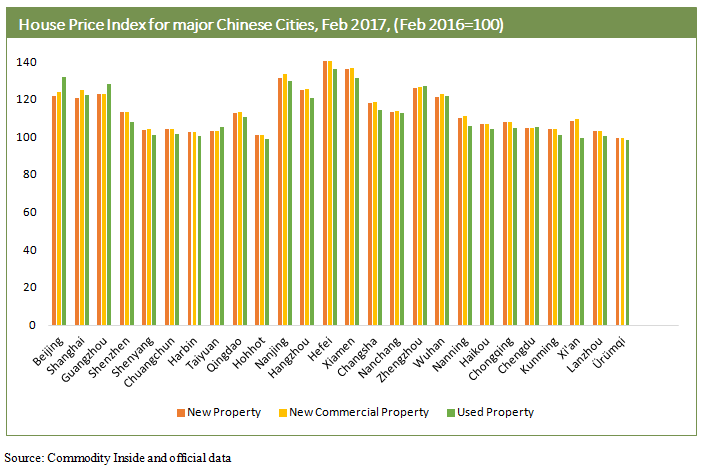 The Chinese property market is underpinned by combinations of socio-cultural and economic drivers, which often drive demand irrespective of prices. For instance, there is a tradition to own a house before getting married. Similarly, purchasing real estate and gold are the most common traditional forms of investment in China which constantly keeps the prices elevated.

Given the booming property market, it also has become an ideal choice for domestic and foreign speculators to make short term gains. Most of them are investing in Tier 1 cities, which are artificiality inflating house prices. Moreover, crowd fund investments have also been on the rise in the market. The reward is so lucrative that major non-property listed companies are also lured to invest in the property market. The government, the central bank and even securities regulatory commission are now introducing new policies to rein the market.

The Chinese housing market has also substantially supported by the inflow of hot money. The US companies have invested huge sums in the Chinese housing market on speculative basis due to low interest rate in the US. However, the US economic policy has been changing under Donald Trump administration. The US Federal Reserve increased the interest rate from 0.75% to 1% in March 2017, the second time in just over three months period. When the Federal Reserve increased the interest rate in late 2015, the Chinese government introduced a number of policy changes to protect its property market and limit the outflow of capital back to the U.S.

Commodity Inside China Analyst Yuefeng Wang writes “The recent interest hike can have significant implications for the Chinese housing market and can start driving capital outflow from the property market, resulting house price crash.” This time some Chinese cities include Beijing, Guangzhou, Shi Jiazhuang and Zhengzhou have quickly responded to the recent US interest hike. They have now introduced new property-purchasing limitations such as increase in the deposits rates and trading rules. We expect more cities including Shanghai will likely to introduce new housing policies in the near term.

Commodity Inside anticipates that in the short-term, property prices will see growth decelerations. China will continue to further regulate housing development, marketing and intermediary services. The overall housing market is expected to be stable this year, but it is unlikely to see prices go down in major cities. Indeed, there are still a number of risks looming over the Chinese property market with the likelihood that the market will become more vulnerable to changes outside China.