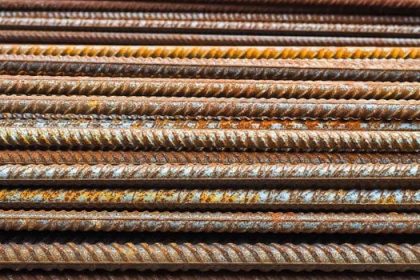 Egypt imposed tariffs on rebar and billet in mid-April which was under consideration for a few months. The import tariffs are now set between 3% and 15% for billets and 25% for rebar. Started from 15th April, tariffs would be effective for the next 180 days initially, with a potential to be extended further.

Import tariffs are set to increase production costs of small local re-rollers, which are mostly dependent on the imported billets. On the other hand, it will help domestic EAF producers by improving their margins. Small Egyptian rolling mills are complaining that the safeguard measures are creating unfair competition for them, leading to the increased cost of production and eventually uncompetitive high finished steel prices. There have already been around US$30 hike in steel prices in the local market since the imposition of tariffs.

Egypt’s steel imports mainly consist of long steel. The country steel production increased in response to the introduction of rebar import licensing in 2016 which restrained non-regulated rebar import to the country.

Ukraine is the largest supplier of steel to Egypt. Ukraine’s steel exports to Egypt accounted for almost $1 billion in value (1.2 million tonnes) in 2018, decreased 4% year on year. There has already been an anti-dumping duty on Ukrainian origin steel in Egypt.

Egypt steel industry is mainly dominated by long steel producers. There are around 25 steel works across the country out of which just eight are capable of producing billet with a total capacity of nearly 8 million tonnes. EzzSteel is the largest steel producer in the country. Other key steel producers include Acrosteel, Ashry Steel, Solb Misr, Delta Steel, Kandil Steel, Egyptian Iron and Steel Co and Sixth of October Light Sections Co (SOLS).

Egypt is the largest consumer of steel in North Africa. Its market is mainly driven by the construction sector. The country is going through a massive re-construction phase in the aftermath of unrest in the Middle East. Major construction activities are in urban residential and commercial sectors which account for almost 80% share in the country’s overall construction spending.

The implication of tariffs

Commodity Inside understands that import tariffs would lead to increase in prices of long steel particularly for small rolling mills. However, tariffs would not create a shortage of billets or rebar in the local market. Local billet producers claim that they are currently running around 60% capacity utilisations. This implies that with favourable market conditions, local production would be able to increase production to fill the imports gap.

Looking at the costs side, the domestically produced billet prices would be elevated due to high input costs, particularly high electricity prices. This will keep small rolling mills in a difficult situation, as they would no longer be competitive, even if they buy from local producers.