by Commodity Inside / Tuesday, 26 January 2016 / Published in Packaging
In early December 2015, the Bangladeshi government banned the export of raw jute aiming to curb the surging domestic jute prices as well as to ensure ample supply for its own jute mills. One of the main reasons behind the price surge has been the severe shortage of jute in the domestic market due to poor harvest. In addition, lower jute production in India has also underpinned demand for imports, thus further driving the prices upward in the international market. The price surge has also been suspected to be manipulated by traders, speculators and mills through hoarding the product.

Commodity Inside understands that the price rise and export ban would have both a short and long term impact on the export market. It has directly impacted both Indian and Pakistani jute mills which are major importers of raw Jute from Bangladesh. With the rise in raw jute prices, cost of jute goods have also been on the rise which is expected to shrink demand in the export market. 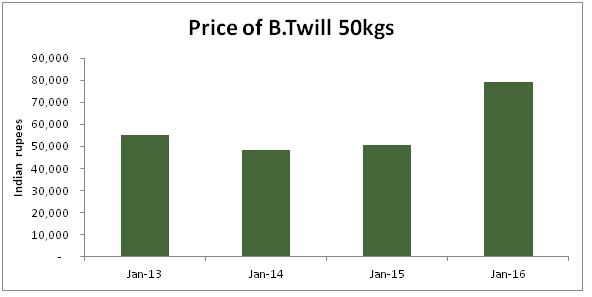 The current situation in the jute market has negatively impacted the jute packaging industry which has already been facing competition from the plastic industry. The price of jute bags has increased in both regional and international markets. Given the rising costs of jute bags and uncertainty around its supply, soft commodities are moving toward using plastic bags. However, in South Asia, governments have been trying to support the jute packaging industry by providing subsidies and making jute sacks mandatory for packaging of various soft commodities. Bangladesh has earlier issued an order for mandatory use of jute bags for packaging six types of goods, including paddy, rice, wheat, maize, fertiliser and sugar, and discouraged the use of plastic bags. Similar, provisions have also been in place in India and Pakistan, where the governments have made jute sacks as a mandatory packaging medium for various products to support the labour-intensive jute industry.

However, the situation has been changing outside South Asia and consumption of jute sacks has been diminishing in bulk packaging. Jute bags, which is used for two centuries as a distinctive packing for Brazil’s coffee exports, has been rapidly being edged out due to its relatively high costs. The coffee industry has now started using large plastic sacks to substitute the 60-kg jute bags, saving millions of dollars a year. The 60-kg jute bag has been a standard unit of measurement for coffee trading since Brazil started commercial production of the bean in the 18th century. Brazil, which is the world largest coffee producer, was packing almost all of its exports in jute bags until recently. However, the situation has been changing and it is expected that this year the country will export more than half of its green coffee in 1-tonne polypropylene super sacks or 21.6-tonne polyethylene liners.

Brazil’s biggest coffee cooperative Cooxupe has nearly eliminated jute while others have progressively increasing the use of polypropylene super sacks. Brazil produces 50-60 million bags of coffee a year. It is also quite economical to use super sacks and liners rather than jute bags as it is estimated that one worker with a forklift can fill a container with super sacks in 25 minutes, while 9 men need nearly an hour with a jute bag. Loading a liner is even faster as beans are dumped in loose.

Despite these challenges, Commodity Inside expects that as countries start banning the use of plastic bags for shopping in supermarkets, there is certainly a quite huge scope for jute bags to be used as ‘a bag for life’, which is quite durable and environmental friendly substitute compared to plastics. This implies that jute bags would somehow make their way through retails channels rather than bulk packaging.

Would you like more detailed information about this topic or any of our others, please contact us at info@commodityinside.com.