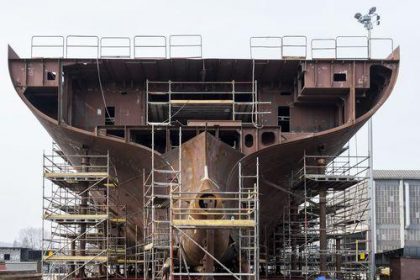 Impact of coronavirus on shipbuilding

The global shipbuilding industry has been in doldrums due to the falling demand caused by COVID-19. In the first quarter of 2020, global orders for new vessels declined by 70% year-on-year to nearly 2.4 million compensated gross tonnage (CGT).

It is ascertained that investment in the shipbuilding industry also hit the lowest level in Q1 2020, since the global financial crisis. Most works in the Asian shipyards remained on hold due to coronavirus. South Korean shipbuilders remained the worst affected compared to the Chinese yards. South Korea, which is one of the major players in the shipbuilding industry, had performed badly in the first quarter this year.

Some Chinese shipyards are reported offering up to 20% discount on new orders. Travel restrictions are also adding more pressure on shipbuilders and can result in delays the orders or cause cancellations. Even when the Chinese shipyards have started operation, they still need to wait for some essential parts from the European suppliers.

Future direction for the shipbuilding

The global trade is expected to be under pressure as shipping routes will take time to return to normal. Even governments will continue to maintain some restrictions on goods imports. It is expected that the shipbuilding industry will see a slump in demand for the total new orders in 2020.

Commodity Inside understands that there would be a drop in orders for almost all types of ships including container vessels, natural-gas carriers, dry-bulk carriers and oil tankers.

The falling oil prices also delaying several energy projects which would have some implications for the shipbuilding industry. For instance, ExxonMobil has now delayed its $30 billion Rovuma LNG project in Mozambique. The final decision about its future investment decision is due over the next few months. This implies that new orders for LNG vessels for the project are also going to be postponed. Given the ongoing market conditions, it is expected that demand for LNG ships are also going to be falling in the medium term.

Shipbuilders have even been asking steel mills for more discounts from the last year. Plate mills, on the other hand, have also been suffering from low price and profitability. Even some mills have been offering prices below cost for years. It may be hard for steel mills to cut prices further even when iron ore prices are holding high.

The falling plate demand has now added more downward pressure on demand for steel plate. While mills are now finding it difficult to negotiate or even renegotiate plate prices.

In China, steel plate inventories are falling, which may, to some extent support prices. Inventories fell by 6.4% in early April from late March and reached 1.06 million tonnes in around 20 major Chinese cities, according to China Iron and Steel Association (CISA).

Japanese steel plate producers usually do not lower their plate prices in line with Chinese mills due to the high demand for Japanese plate as well as limited surplus quantity for the exports market.

It would be hard for new players to enter the market unless they are fully integrated both vertically and horizontally. Saudi Arabia is trying to enter the market and developing shipbuilding yard at the King Salman Maritime Complex at the Ras Al Khair industrial port, which is managed by Saudi Aramco, the world largest oil producer. The need for such complex was long needed, though it may be a little late now.

Steel plate, which is one of the major raw materials for making ships, is yet to be decided whether it to be manufactured locally. The country lacks plate production capacity and relies on imported materials. However, Saudi Arabia is quite keen on developing its own plate mill, likely to be in a joint venture with a foreign entity.

Commodity Inside understands that the partner should ideally be a producer which would have some surplus slab capacity otherwise building an integrated mill would not be economical, especially in this case. Sourcing slab from third parties can be an alternative option which can be mixed and matched with spot buying and long terms contracts.

China and South Korea account for almost half of the world shipbuilding capacity.

About Commodity Inside Steel Plate and Shipbuilding Capabilities:

Commodity Inside has a vast experience in the steel plate and end-users. We have a number of off the shelf reports on the steel plate industry. We also provide consulting and bespoke studies. Our initial scoping assessment is free. Please contact us now about your query at Research@commodityinside.com

You may be interested in exploring our new data platform, which now provides access to all flat steel data under one subscription.