by Commodity Inside / Wednesday, 22 January 2020 / Published in Steel 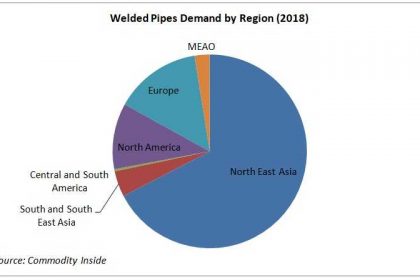 Welded pipes are produced by shaping flat steel (steel plate or steel sheet) to cylindrical shapes through mechanical pressure and then the seam is joined through welding. Quarto plate ( which is also known as reversing mill plate) is largely used in the industry for the production of welded pipes. Moreover, hot-rolled coils are also used as a substrate for the production of welded pipes and tubes. Welded pipes are also known as ERW (Electric Resistance Welded) pipe.

The weld or seam in these pipes is in the form of a spiral. Plate or sheet is shaped into spiral form through using submerged arc welding (SAW) process. These pipes are usually are in large diameters forms and mostly used as long-distance pipelines in the energy sector as well as many other sectors such as structural engineering.

These pipes are made after curving the steel plate in the form of pipe and performed the welding in a longitudinal direction. Mostly electric resistance welding is performed in the manufacturing of these pipes. LSAW is also used in making these pipes.

Furnace Weld (FW) or Continuous Weld is a unique weld method to produce pipe with minimum welding defects. The process is comparatively costly. The pipe is welded by heating it in a furnace at the welding temperature followed by extrusion over a mandrel. High-performance pipes like those used in boilers are sometimes made through this process.

Submerged arc weld (SAW) is much common in the industry. The electric arc and weld are completely submerged in the fused granular flux and remain protected from oxidation during the process. In the spiral pipes, it is known as S-SAW or HSAW while in longitudinal pipes it is named as LSAW.

The most cost-effective pipe production process is through electric resistance weld (ERW). Cylindrical shaped plates or sheets are subjected to the high currents at the joining edges. The electrical resistant heat up the joint and produces weld at the seams.

The finishing of welded pipes depends on customer requirements and applications. These include threaded and coupled ends for use in long fluid transportation lines, threaded end without coupling for diverse diameter lines, Plain End or Cut Square for the general purposes. Pipes with pre-grooved or bevelled end are supplied for structural applications.

ASTM A53 and API-5L are commonly used to define general specifications of welded pipes. ASTM B36.10 standard is used to define sizes and dimensions of pipes and tubes. While some of the industries have their own norms and custom sizes.

In North America, designations used to define pipes sizes are known as Nominal Pipe Size (NPS) and Schedule Number (Sch.). NPS defines the internal diameter of pipes and Sch. refers to the range of wall thickness.

In European standards, Nominal Bore (NB) is used to represent the internal diameter in mm and OD represents the outer diameters of pipes and tubes. ASTM/ANSI standard weights are usually expressed in Kg/m or lb/ft.

The following length standards are used in the market and are vital for the pipeline project designs.
1. Single random length (SRL) ranges between 18 – 25 feet plain end or 18 – 22 feet threaded and coupled pipes.
2. Double random length (DRL) ranges between 38-40 feet.
3. Longer than double random is more than 38 – 40 feet in length.
4. Cut Lengths are produced in fixed lengths within +/- 1/8 inch, while some are produced up to 80 feet long.

Top Welded Pipes and Tube Producers in the Market

Hydrocarbon fuel demand and fuel prices are keys to the demand for welded pipes. In additions, urbanisation is also playing a key role in driving the demand which supports infrastructure for water and sewerage lines, using welded pipes. Other factors which drive welded pipes demand include GDP growth, construction, automotive and chemical industries.

Developments in the Welded Pipe Industry

North-East Asia, North America and Europe show stable demand growth in pipeline developments over the next five years. China announced in 2017 to increase its existing 112,000 km of energy pipelines network to 169,000 km by 2020 and up to 240,000 km by 2025. Japan has been planning to build a 1,500 km pipeline to import gas from Russia. 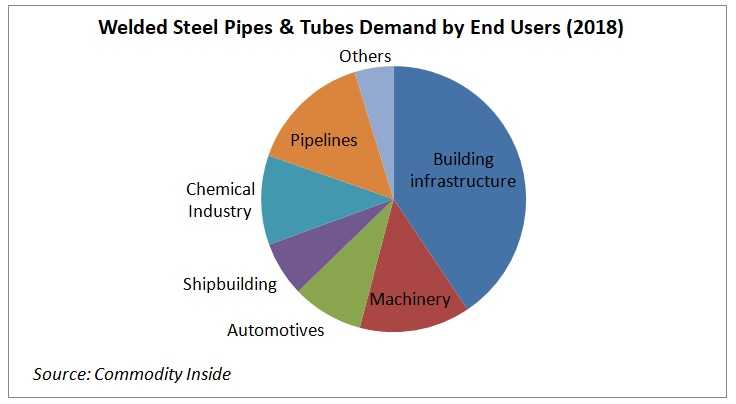 Pipes are used for shipping oil and gas from oil fields to export terminals, refineries and end-users. The global pipeline transportation industry is driven by increasing global energy demand and fuel trade.

Welded steel pipes are also used in construction and infrastructure sectors for different applications. These applications include scaffoldings, electrical and light poles, structural columns and beams in steel structure buildings like stadium roofs, metro and railway stations. These pipes can also be used in the sewage line and water supply lines.

About Commodity Inside Tube and Pipes Capabilities:

Commodity Inside has a vast experience in the steel pipes and tubes market. We have a number of off the shelf reports on the pipe and tube industry. We also provide consulting and bespoke studies. Our initial scoping assessment is free of costs. Please contact us now about your query at Research@commodityinside.com

Tagged under: pipes and tubes